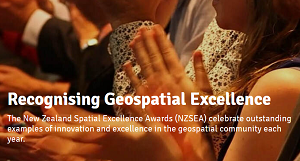 In October we'll be looking forward to announcing the winners of this year's awards. S+SNZ have done exceptionally well in being honored with awards in previous years. In October 2018 we congratulated the winners including S+SNZ members Kat Salm, Elaine McAlister, Claire Buxton, Geoff O’Malley, Dr Robert Odolinski and Julian Thom and all the other recipients of NZ Spatial Excellence Awards.

The NZSEA award winners are automatically entered into the Asia-Pacific Spatial Excellence Awards and we were thrilled that both Kat Salm and Elaine McAlister went on to receive APSEA awards.

In 2017 Wellington City Council’s Living Labs entry won the 2016 New Zealand Supreme and the overall APSEA award for industry excellence and the People and Community Award.

The final awards event will be held 17 October at Te Papa in Wellington where all the 2019 winners will be announced.